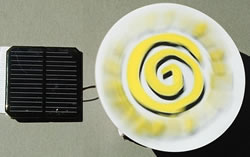 Create something, like a spinner, that you can attach to the motor so that when the motor spins it will be easy to tell that it is working. See the picture at the top of this page for an example of spinner. Below there are instructions on how to make a spinner for your motor.

When you close Switch #1 and open Switch #2 the light energy hits the solar panel where it is transformed into electrical energy that passes through the wires to the battery.

When you open Switch #1 and close Switch #2 the energy that is stored in the battery passes through the wires to the motor and the motor runs!

Solar powered garden lights operate on the same basic principal except that they switch off and on automatically by using a photoresistor.

Set Up - Putting it all together: